“This is the real world. Sometimes, we can’t make it right. We can only do our best.” 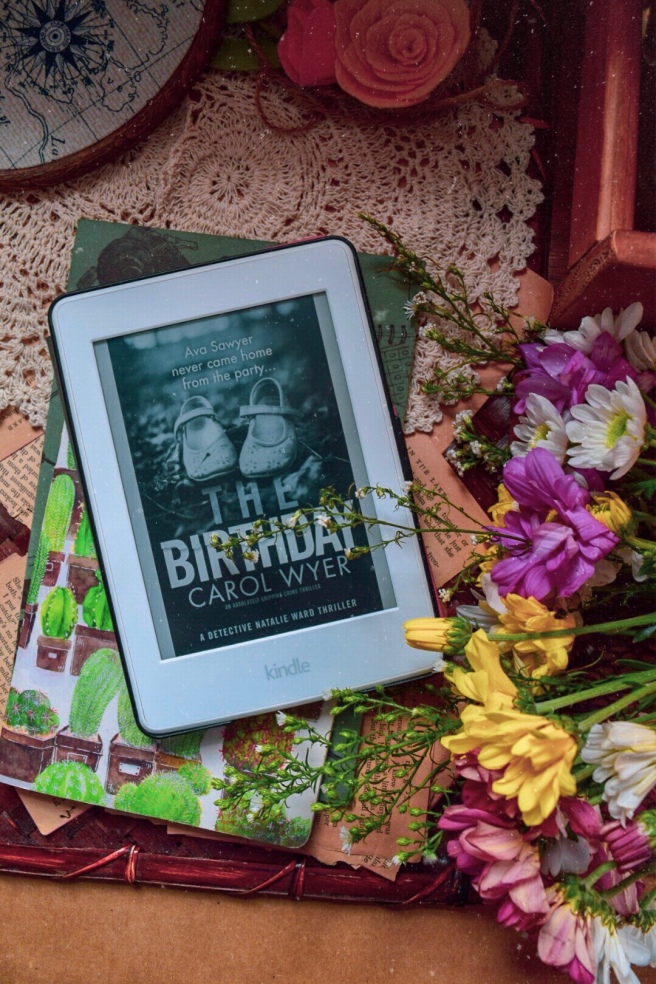 When five-year-old Ava Sawyer goes missing from a birthday party at a local garden centre, the police are bewildered by the lack of leads. That is until two years later, when Ava’s body is found and another little girl, Audrey Briggs, goes missing. Audrey also attended that party …

Leading the investigation is Detective Natalie Ward. A mother of two teenagers, this case chills her to the bone, and is a disturbing reminder of the last job she worked on. One that ended very badly.

Natalie soon discovers that Ava’s mother has some worrying gaps in her alibi and as she digs deeper, she’s sure Ava’s father is not telling the full story. And what did the owner of the garden centre Elsa see that day? Something that she’s not telling Natalie …

Just as Natalie is facing up to the grim possibility that Ava and Audrey were killed by someone close to home, another little girl from the party doesn’t come home from her ballet lesson. Can Natalie find a way to stop this killer before more innocent lives are taken? (Goodreads)

I love a good crime thriller and this one really satisfied my craving for a true detective story. It is frankly hard to read as a parent because it involves young children. I don’t think I can read another crime novel with children as the victims. It’s just too heartbreaking, but this one was so unputdownable.

“It’s always been a dark world.”

The novel features a really strong female character. Natalie Ward struggles to balance her career, marriage and raising her kids. I felt for her because it’s really hard to be a working mom, and she’s a detective at that. I can’t help but wonder, if she was male, would it have been an issue? I bet it wouldn’t.

I also loved her team of investigators—they are a dream team and I would love to see more of them in action. All the characters are well-rounded and all with interesting back stories.

“Work with what you’ve been given. Don’t turn your attention to what might happen. It hasn’t yet.”

I felt that the story could have gone faster in some parts, but the murderer’s motive is one of the most chilling I’ve ever encountered so it’s definitely worth the wait. I think I now have a fear of yellow dresses. It would be some time before I recover from this book.

Big thanks to NetGalley and Bookouture for giving me a copy of this wonderful book in exchange for an honest review. 🌸

Carol E. Wyer, who also writes as Carol Wyer, is an award-winning author and stand up comedian who writes feel-good comedies and gripping thrillers.

The DI Robyn Carter series has earned her acclaim as a crime writer and the first book in the series, Little Girl Lost, shot to the #2 best-selling spot on Kindle #9 best-selling audiobook on Audible, and was also a USA Today top 150 best-seller.

Carol has been interviewed on numerous radio shows discussing ”Irritable Male Syndrome’ and ‘Ageing Disgracefully’ and on BBC Breakfast television. She has had articles published in national magazines ‘Woman’s Weekly’ featured in ‘Take A Break’, ‘Choice’, ‘Yours’ and ‘Woman’s Own’ magazines and the Huffington Post.

Carol is a signed author with Bookouture (part of the Haschette Group) Canelo and Delancey Press.

4 thoughts on “Book Review: The Birthday by Carol Wyer (eARC)”

Happy Friday! 🌺🍃 I’m just taking a break from all the book flatlays because I am so obsessed with this IG story filter. It’s called Flora if you want to search for it. It’s giving me strong Wilder Girls (by Rory Power) feels, something I’ve been wanting to ask my husband to do an edit for me but turns out I don’t need him after all. I discovered this while my son and I were playing with the selfie filters. I love modern technology. 😂 ⁣ ⁣ ☕️ What’s the story behind your profile photo?
[3/4] CHILDREN’S BOOKS from my @bbwbooksph haul ⁣ ⁣ ⁣ ☕️ Do you still remember the very first book that hooked you into reading? ⁣⁣ ⁣⁣ I don’t! But I know it was a series featuring young girls in a boarding school, they had blue covers, the title may have had a St.—something on it 😅 The reason I don’t remember anymore is because most of the books I loved when I was a kid were only borrowed. Now that I have my own son (he’s almost 4 yo) I’m helping him build his own library as early as now. He picked out all of these, plus others we had to leave behind because he just wanted too many (I wonder where he got that from!?) 😂 ⁣
[2/4] NONFICTION PICKS from my @bbwbooksph haul! 💗 These are all for my friend who loves reading business/self-help books. I was really impressed by the nonfiction books available at BBW. These are all such great finds that I’m glad my friend always lets me borrow from her shelves! ⁣ ⁣ I have yet to explore the other genres like History, Biographies, etc. Good thing I will be going back for sure because we just won the photo contest the other day 🤩 Thank you so much, BBW! ⁣ ⁣ ☕️ What was the most recent nonfiction read that you enjoyed?
[1/4] FICTION PICKS from my @bbwbooksph haul! 💗 I love how diverse the selection is, and every year I find new titles to love. Most of these have been on my wishlist for some time now, like Goodbye Vitamin, The Forgotten Garden, Dracula, Elevation, and Once Upon a River. I got The Language of Dying because I love Sarah Pinborough’s writing in Behind Her Eyes and the premise is really intriguing/heartbreaking. ⁣ ⁣ In Praise of the Stepmother is one of my all time favorites. I’ve read a library copy back when I was still in university, reread it in ebook form, and now I finally finally have a copy. 💗 The writing is brilliant, and there are gorgeous artworks in this edition, too. I’m just so happy and can’t wait to reread it for the third time. ⁣⁣ ⁣⁣ ☕️ Have you read any of these or do you see anything you like? ⁣
It’s Year 2 of our book club’s Valentine Book Exchange, and our theme this year is “Take Me On A Date”. My “date” is the awesome @unopenedpages and she curated an Art/Museum Date for me. She knows me so well!! The book feature is “From the Mixed-Up Files of Mrs. Basil E. Frankweiler” by E.L. Konigsburg—where two young kids run away from home to live in the Metropolitan Museum of Art. The Met is also one of the highlights of our trip to NY years ago and I won’t be lying if I say I also thought about doing the same thing when I was there 😆 ⁣ ⁣ Our bookish date also includes: a sweet letter, a lovely sketch/scrapbook for my art prints and stickers, magnetic bookmarks featuring iconic artists (Frida Kahlo, Van Gogh, etc) and home-baked goodies not included in photo because they’re already in my tummy. 😋 Thank you dear @unopenedpages! I love everything 💗 ⁣ ⁣ What’s your ideal date? ☕️
Of course today’s post is all about my husband @mervinmalonzoart (captured here in his happy place/favorite bookstore section) 😛 I’m grateful everyday just to wake up and have you by my side. No one understands me better than you do—all my bookish obsession, my tempers, my impromptu book reviews, and my daily need for unli-coffee ☕️ ⁣ ⁣ Happy Valentine’s Day, Tatay 💗 and Happy Hearts Day, bookish friends!! Sending you all the 💗📚🍫💐🌹🌻🧁🍩🍕💕

Mom of baby Elias and wife to National Book Award-winning author and artist Mervin Malonzo. I am part of the small team behind the emerging indie publishing group Haliya Publishing and a co-parent of Biblioflora, a literary arts and goods store based in Manila. Aside from books, I’m also crazy for cats, coffee and flowers.